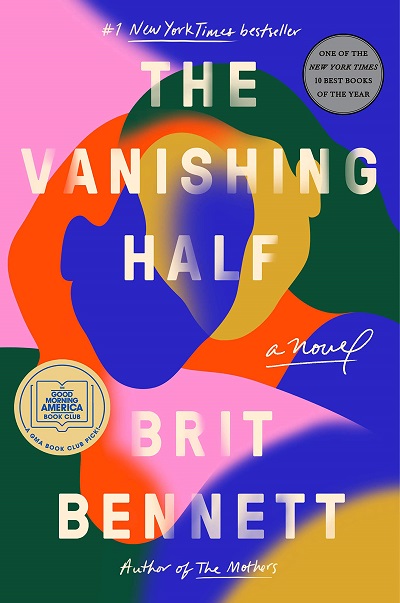 The Vanishing Half by Brit Bennett

The Vignes twin sisters will always be identical. But after growing up together in a small, southern black community and running away at age sixteen, it’s not just the shape of their daily lives that is different as adults, it’s everything: their families, their communities, their racial identities. Many years later, one sister lives with her black daughter in the same southern town she once tried to escape. The other secretly passes for white, and her white husband knows nothing of her past. Still, even separated by so many miles and just as many lies, the fates of the twins remain intertwined. What will happen to the next generation, when their own daughters’ storylines intersect?

Weaving together multiple strands and generations of this family, from the Deep South to California, from the 1950s to the 1990s, Brit Bennett produces a story that is at once a riveting, emotional family story and a brilliant exploration of the American history of passing. Looking well beyond issues of race, The Vanishing Half considers the lasting influence of the past as it shapes a person’s decisions, desires, and expectations, and explores some of the multiple reasons and realms in which people sometimes feel pulled to live as something other than their origins.

email your reviews to alicia@thedigitaldiarist.ca

Kayla and I were once invited to a party, with the promise of free donuts, that turned out to be a goodbye party for a couple we did not know. People cried. Kayla and I ate their donuts. It makes me think about how there's a certain amount of privilege you have to acknowledge when you're invited into someone else's heartbreak. And then again, at least in the case of the book, in wanting so badly to be a part of their subsequent healing, but recognizing you're not in any way entitled to viewing it. When dealing with topics as complex as the ones we find in the book, I think Brit Bennet's achievement of making me engage in tragedy at a distance is nothing short of a triumph.

The way that the characters are written is stunning, there's rarely a character that you're introduced to in the book that doesn't feel like they could hold a story on their own. I could really truly love this book just for that.

But I don't think it's perfect. I think the way that Brit Bennett chooses to delve into stereotypes to put emphasis on heavier themes in the book are harmful. The most damning examples being the portrayal of Sam, the darkest character in the book apart from Jude, as violent and abusive, Jude's treatment by the people of Mallard in general, and the parallels drawn between Reese's identity as a trans man and the way that Stella chooses to hide as a white woman are, I think, unfair and short-sighted. If these narrative choices make the book less meaningful, I'm not sure that I have the authority to say.

What sets this book apart for me is the voice. It sounds like it's supposed to be calling you home, but because I'm neither Black nor have roots in the American South - I'm not sure where I'm supposed to go. But I'm compelled to follow it anyway. It's so clear that this book was not written with me in mind, but I'm still encouraged to consume it. And as grateful as I am for the opportunity, I more so hope that the community this book was written for found comfort in the story and it's characters.

fave quote: "How did I become me and you become you?"  This book is about IDENTITY, babes.

I think of this as being a book about consequences. Maybe that's why I felt much more invested in the second half of the book, getting to know Stella in her new life and especially getting to know Jude and Kennedy. Stella's choice creates a ripple effect that complicates the relationships of all these characters. It permanently separates her from her twin, Desiree; it prevents her from having honest relationships with her husband and daughter; it leaves a missing piece in Desiree's life that Jude wants desperately to fill or at least understand.

A person's identity is shaped by all kinds of external influences. I don't think that a self is what you're left with when you strip all those things away—rather, a self is what you build from the materials you've been given. A self is a series of choices, of things that you have accepted, rejected, emphasized, and hidden. And I strongly believe that if you don't make those choices, the world will make them for you. The world will assign you an identity if you do not build one for yourself. They will fuse actor and character and go on believing that you are the role you play.

“That was the thrill of youth, the idea that you could be anyone. That was what had captured her in the charm shop, all those years ago. Then adulthood came, your choices solidifying, and you realize that everything you are had been set in motion years before. The rest was aftermath.”