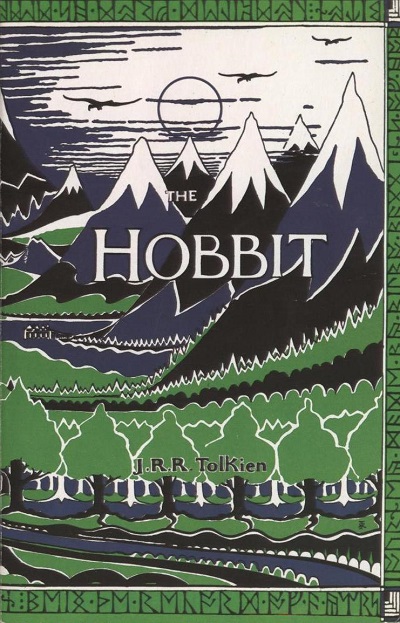 “A glorious account of a magnificent adventure, filled with suspense and seasoned with a quiet humor that is irresistible... All those, young or old, who love a fine adventurous tale, beautifully told, will take The Hobbit to their hearts.”—The New York Times Book Review

Bilbo Baggins is a hobbit who enjoys a comfortable, unambitious life, rarely traveling any farther than his pantry or cellar. But his contentment is disturbed when the wizard Gandalf and a company of dwarves arrive on his doorstep one day to whisk him away on an adventure. They have launched a plot to raid the treasure hoard guarded by Smaug the Magnificent, a large and very dangerous dragon. Bilbo reluctantly joins their quest, unaware that on his journey to the Lonely Mountain he will encounter both a magic ring and a frightening creature known as Gollum.

email your reviews to alicia@thedigitaldiarist.ca

The Hobbit really suffers from the fact that Tolkien is so good at naming things and deeply bad at everything else. The plot is not captivating, the points of tension or conflict don't build on each other, the characters do not inspire anything from me, and the greatest disappointment is that the story somehow isn't a lesson?? I don't want a book to preach to me, but it made no sense that this book had absolutely nothing to say, morally. Despite all the religious allegories and it being a literal children's story, nobody learns anything, there's not even a righteous, ethical announcement - everyone stays exactly the same. The most pivotal character moment is probably Bilbo leaving his home at the very beginning, an act of bravery (however reluctant), which is then negated immediately as he essentially skirts out of every possible battle for the entirety of the journey.

The worldbuilding is great - I think I would have enjoyed it more if it were completely new to me, but I also think the fact that it wasn't is a testament to how good Tolkien is. But this wasn't a story. This was a description of a setting. And I'm not sure I care about the world if I don't care about the people who populate it.

Fave quote: "Indeed it was long before he had the heart to make a joke again." because it's such a touching line it almost makes me forget these people never gave any indication that they were actually close friends lmao

I have a fondness for Tolkien's style of narration. The storybook charm of it was immediately appealing. He understands completely the world he's created, and presents it matter-of-factly.

The dwarves tend to blur in my mind as one large group, without much opportunity for individual personalities to shine through. The only character I get a good sense of is Bilbo, and I love that strange little Hobbit. He's so very English, bound by politeness and a sense of duty, and a reluctant adventurer. I admit I have a suspicion of people too eager for adventure—I'm rather Hobbit-like myself.

My favourite quote is what Gandalf says at the very end of the adventure, after Bilbo remarks that the prophecies of the old songs have come true: "And why should not they prove true? Surely you don't disbelieve the prophecies, because you had a hand in bringing them about yourself? You don't really suppose, do you, that all your adventures and escapes were managed by mere luck, just for your sole benefit? You are a very fine person, Mr. Baggins, and I am very fond of you; but you are only quite a little fellow in a wide world after all!" To which Bilbo laughs and replies, "Thank goodness!"

And I think that's the truth at the heart of The Hobbit. This story is not driven by our characters; it is driven by the unknowable forces that shape the universe (and nudged along by meddling wizards). Which is why I think the plot is not very satisfying to a modern reader. You have to enjoy the adventure merely for what is it, and if you are not interested in the trolls or dragons or riddles, you aren't given much reason to care about these characters or their quest. For my part, I enjoyed the adventure.

And I can't help but think of the Baker's Wife in Into the Woods singing, "Just remembering you've had an "and" / When you're back to "or" / Makes the "or" mean more / Than it did before..." This was Bilbo's moment in the woods.